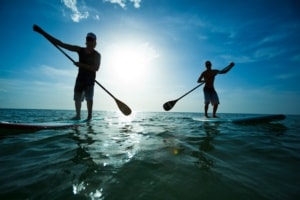 Asking who invented stand up paddle boarding is like asking who invented language. It has been around for so many years, yet started out as a method to sneak on enemies in times of war. It started with the paddler standing in a dugout canoe with some cultures and on a piece of drift wood for others. Ultimately, it has not gone through many different phases and there is no clear origin.

The inventor of modern SUP was John Ah Choy, who was a Hawaiian surfer in the 1940s. Getting older, he felt it more and more difficult to get on the surf board. For this reason, the standup paddleboard was devised, to stand on the board after the break, and hunting waves after paddling with a canoe paddle.

Once stable civilizations started forming throughout the world, it actually started to be seen as something more than a means of travel. Ancient fisherman used to build the boards out of reed making it seem like they were floating on straw. They actually used a paddle as well, or more like a stick of bamboo. These South American “boards” were called “little horses of reed and produced in present-day Peru. In seventeenth century Venice, many used this as a method of going through the city and it is still used today for tourists in Italy today.

You could say that the modern kind of boarding was discovered in Hawaii in 1778 when Captain James Cook first saw tribes surfing together. This was the first time a European witnessed surfing to bring it over to the large civilizations. At the time, the Hawaiians’ boards were so sheer that they needed paddles to power them far enough from the shore. This is essentially where the concept of paddling on a board was first seen as it was always in canoes. Since the method of stand-up paddling was used in preparation of a surf, it is safe to say surfing was invented first.

As you can expect, the Hawaiians carved the boards from wood at one point unlike today where they are made of a sophisticated duo of a foam interior to keep it floating wrapped in fiberglass and more commonly, carbon fiber and plastic. The little reed horses had a nose that rose up out of the water looking similar to a cornucopia but over time it was flattened out and the overall board has gotten thinner with every new material. Since the 1940’s the branch-off from normal paddle boarding of paddle surfing has grown more popular than the original as it is known to quench the thirst of thrill-seekers rather than tranquil riders.

The history of the paddle board is relatively short as there are still many pieces missing from the puzzle but as a recreational activity we see today; it was positively invented by the Hawaiians. Then it seems to have been carried to Italy for navigation through their water-streets. Since the water there is so still, that led to flatter boards which were eventually brought to America. It was here that the 1940’s paddle surfing became a thing much bigger than paddle boarding and the material shifted. Finally, after all this time paddle boarding is just a recreational hobby known for its relaxing views and various activities like SUP yoga, island hoping, or merely just going on a lover’s trip across a lake. 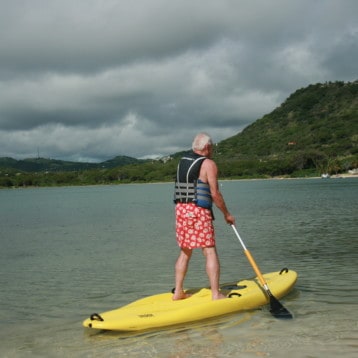 5 Pro Tips for Beginners Learning to Paddle Board